It goes without saying that as the airlineguys, we love all things related to airlines. However, every now and then a particular airline will rise to the top of our consciousness and there it remains for a bit of time. It’s almost like the aviation universe starts to present images, stories, and references to that particular airline. We got TWA “on the brain” when we saw a picture posted and retweeted on twitter of a TWA meal tray. An economy meal tray. Full-size meal tray. Complete with entree (chicken or beef?), salad, dinner roll, dessert, and full-size coffee cup. Ahhh, those were the days. We briefly experienced the time period of the full-size, domestic flight, meal tray…in economy class.  It was short-lived, but we do remember.

If TWA were a personality we wonder whether or not it would have suffered an inferiority complex. Think about it, in the halcyon days of air travel, TWA and Pan Am were the gold standard. However, it was Pan Am that ushered in the days of the Jumbo jet. Pan Am that pioneered around-the-world flights. Pan Am was the “official” flag carrier of the US. And close behind was TWA.

Both carriers were very similar in many aspects. Both had their share of triumph and tragedy, yet they were distinct carriers that occupy a soft spot in the minds of the traveling public the world over.

If TWA were a personality and had an inferiority complex, we would have advised them to snap out of it! Here are some note-worthy aspects of TWA: 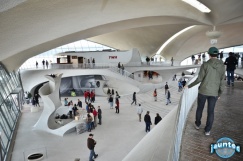 The forces of the industry, mismanagement, costs, and tragedy (hijackings, TWA 800) were too much for the carrier once that once touted “The Most Comfortable Way To Fly”. And we all know the rest of the story…

While there is a lot more information regarding the storied past of TWA, we wanted to bring you the highlights of this once great airline. Every now and then an airline from the past will come to haunt us in the present. That’s okay, we like these kinds of ghosts from the past. So, be on the lookout for other carriers we highlight. After all, we are the airlineguys.