Here’s Part 2 of our chat with Katherine… 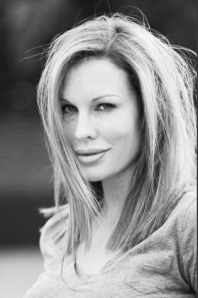 AG: Here’s a big question for you. (long pause) Do you like being a superstar?

KL: I am not a superstar. I’m just in my own mind, and that’s where it’s important. (laughter)

AG: Speaking of being a superstar, where did the “Deltalina” moniker come from?

KL: There was a super sweet woman on FlyerTalk that started it and said that I resembled a little bit of Angelina Jolie, and she mixed that with Delta. So, Deltalina. I’ll be compared to Angelina Jolie any day!

AG: We find you more beautiful than her!

KL: Stop it!…I’ll pay you later! (laughter) I love it! I love it! So, yeah that started, oh my gosh, 3 and a half years ago and it just stuck. So, it’s amazing that more people go, ‘Oh my gosh, it’s Deltalina!’ There are quite a few that don’t know my name. So, it’s really cute.

AG: So, do you prefer to go by Deltalina or Katherine Lee?

AG: So, what’s next for Deltalina? You have any plans for her?

KL: You know what? I’m just enjoying my time at Delta.

AG: Let’s talk about the Delta video. The Delta safety video. We would have to say it’s probably the most watched safety video of all time. We checked this morning and there were over 2.6M views on YouTube. And that’s just YouTube. Think of all the people who’ve seen the video on the airplanes.

AG: When you think back to this whole phenomena of Deltalina and the finger wag, is this what you expected when you did the video?

KL: Oh, heaven’s no! I don’t think anybody expected it to be this big. I mean, not even Delta. No. Absolutely not. And all the opportunities it has offered me have been amazing. The people that I’ve met. But never in a million years would I think that I’d be at the Munich Airport and someone would recognize me going, ‘Oh my gosh! That’s the girl from the video!’ I mean, I’m recognized all over the world and to me that’s bizarre, but great! It’s bizarre that people actually watch that video the way they do.

AG: Does that make you uncomfortable in a way when people know who you are? Just walking with you on our way to interview you, we could see people looking at you with a sense of recognition. Has that ever made you feel uncomfortable or awkward?

KL: Only when I have a really bad hair day or I have really bad skin going on or I leave my zipper open by accident. That’s the only time it’s embarrassing! (laughter). “Deltalina just walked by me and her zipper was open!” (laughter) That’s the stuff that I always worry about! Like oh my gosh, what if they catch me picking my nose? That’s the kind of stuff that makes me hyper-aware, the way that I look when I’m walking around. Like always having a smile on my face. Yeah, there’s just not a bad day for me here.

AG: It’s hard to walk in slow motion and have your hair blowing all the time too!

KL: Exactly! Because that fan gets really heavy! (lots of laughter)

AG: How has your life changed since this video went viral and took off and Deltalina became who she is?

KL: I have been able to do so many marketing events representing Delta, which has been incredibly fun. You know variety is the spice of life. Not only am I an instructor, I fly and I also do marketing. And that’s has been really, really a lot of fun representing Delta in that capacity. It’s been wonderful. Meeting new people. It’s been good. It’s offered me more variety than what I do in my work life which has been incredibly fun.

AG: I’m not sure if you remember, but I remember having a conversation with you during our time at Song, and you mentioned that you had always wanted to be in a safety video. You said it had always been a dream of yours. You were like, ‘I don’t even need a speaking role just a part in it.’

AG: What advice would you give someone who’s looking to do something they’ve always wanted to do?

KL: Don’t give up! Keep on trying. I think it’s one of the great things about the company that I work for, Delta. They’ve always been inclusive of everybody. It was an open casting call for all the FAs. And then everybody auditioned and the list was whittled down. And then we were videotaped. So, everybody was given a chance to try out and then it was determined by how well you were in front of the camera. It was truly by talent, you can say. But don’t give up! I remember vividly, when I first started flying how I wanted to be in the video. I said to myself if I get in the video I will make sure I represent well, all the time. For the 4 years it’s been on, I have never dismissed anybody that has come to me and said, ‘oh you’re in the video.’ I’ve always taken a picture with them, or talked about it, or signed an autograph. And I always approach it like it’s the first time I’ve been asked about the finger wag or somebody says ‘Oh my gosh, you’re the girl!’ So, keep on trying! Absolutely!

AG: So, you’ve always wanted to be in the video. Now that you have been in the video, what advice would you give the next person(s) who stars in the video? And we’re not sure how much detail you can share with us on any plans to replace the current safety video.

KL: I actually don’t have any details regarding a replacement safety video. What I wish somebody would have to told me is that you have to have a thick skin. Because you have people that’ll always be envious. And will always be…I don’t want to say hateful because hate is such a strong word. But hurtful. And the things that they say and write. Our video was the first one that was put out on the internet before it was even put on the aircraft to kind of see how social media would take over, and word-of-mouth, and see what would happen on YouTube. And you have the kind of response on YouTube, and some things were just so nasty and people didn’t know me. I don’t think that I had that thick skin that I needed to initially kind of be confronted with all that. So, my advice is it doesn’t matter how nice you are, and how awesome you are, people will always be envious of what you have. And with people watching that video, you’re going to get that. That’s how people are. It’s unfortunate but that’s how they are. I’d tell them don’t listen to any of that hateful, mean-spirited stuff. That’s how I would set them up for success. Don’t read the stuff that’s on YouTube. It’s amazing to this day that when I fly with people they say ‘Oh my gosh, you’re so nice.’ I’m like, ‘Why would you think I wasn’t nice?’ And they say, ‘well, you know, the video.’ What about the video? People judging a book by its cover.

AG: What misconceptions do people have about you?

KL: That I have this incredible ego. That it’s all about me. That I’m stuck on myself. That I’m a complete (whispers) bitch. And I’m not. Those are the biggest things. Oh gosh! I heard a great rumor yesterday.

KL: That apparently I had just married this movie executive out in LA and I was going to leave Delta.

KL: No. Unfortunately. Which is interesting because the entire crew thought that was the truth. Yeah.

AG: We heard the exact same thing a couple of days ago!

AG: We know you’ve been asked about the finger wag before. For the record how’d it come about?

KL: The director suggested I do a little finger wag. I think there were like 7 different takes. Left hand. Right hand. Kind of above where my mouth is. Below. And we kind of just tweaked it. He was just like, ‘add some personality, like add a little sass to it.’ It was a culmination of the both of us coming together. It was not my idea. It was truly his. I just put my own little twist on it.

KL: A little swagger in my wagger! (laughter)

After taking a few pictures with Kat, some hugs, and kisses on the cheeks, we said our goodbyes. We walked away from each other whereby she blended into the crowd of international passengers rushing to catch their flights. Unbeknownst to these customers, they’ll be seeing hearing her voice and seeing her wag her finger at them very soon. 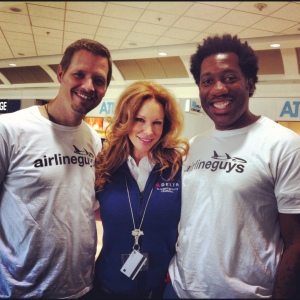