We’ve seen her over 2.6M times. Sassy. Confident. She grabs your attention. Once you start watching it’s difficult to look away. The voice. Clear. Each word, articulated well. Was that an accent of some sort? Not sure. The eyes. A cool blue. Piercing. The skin. Fair. Smooth. Then it comes. The moment you’ve been waiting for. Even if you haven’t been paying attention up to now, you stop what you’re doing and you look directly into her eyes and she says it. “Smoking is not allowed.” All the while she’s giving you the finger. The infamous finger wag. 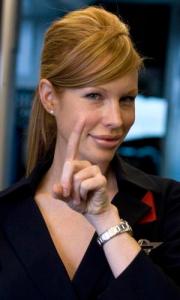 We’ve just described a moment that has taken place over 2.6M times on YouTube and countless times on Delta aircraft all around the world. What could be considered the most watched, most discussed, most debated safety video of all time features Katherine Lee as the lead flight attendant (FA). While there are many interesting and creative safety videos that have come and gone, none have captured our hearts like this one.

We recently tracked down Katherine at Atlanta’s Hartsfield-Jackson International Airport.  Trust us, she’s a busy woman, who happens to fly out of the world’s busiest airport. We had requested an interview some time ago and we were finally able to arrange a sit down chat.

When we met her on the busy E Concourse, gone was the blue dress. She was casually dressed in dark-colored khakis, a white shirt, and blue zip up fleece vest. Gone was the swept-back “up-do”. Her hair was down and voluminous. Still present was her warm genuine smile, friendly blue eyes, the fair skin. Even when not dressed as the part of a FA, people recognized her. There were stares and nods of recognition as we made our way to a quieter area on E Concourse.

(A bit of background: We’ve known Katherine since 2003, the year Song Airlines, Delta’s low-fare service was launched. Since that time we’ve gotten to know her and consider her a good friend. While at Song we served as Peer Coaches together, represented Song at numerous marketing and PR events, and even flew our very last Song flight together (along with our other good friend Jo). Once we returned to Delta we again worked closely together, including facilitating customer service classes and representing the brand of Delta at various social, civil, and marketing functions. We were even in a Delta commercial together. Good times. Good times indeed!) 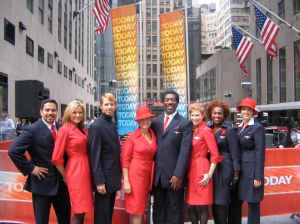 Representing at the Today Show

After exchanging hellos and hugs we grabbed a quick bite to eat and got right into it.

AG: Thanks for joining us. What have you been up to today?

KL: I’ve been helping FAs with their continuing training; helping them maintain their qualifications, and with safety related issues on the aircraft. Safety always comes first. And we want to make sure everybody is up to par, up to speed with what needs to be done if there were any type of emergency.

AG: So, we understand safety is the number one priority of being a FA. In addition, service is also a major part of being a FA. How important is providing service to your customers?

KL: Well, I think it’s very important. I think that’s the difference. It’s what sets us apart from other airlines. Airlines strive to be safe, and that’s the number one priority. But when it comes to customer service, that’s where you have the customers come back. That “legendary service” I like to say.

KL: Well, I want to leave my mark on everybody. So, when they get off the plane they think “gosh, that was good flight!” and it was really, really fun because I got to fly with that crazy redhead that was in the video and she was a bundle of fun!

AG: So, it’s not like you want to leave a mark from a Sharpie, right?

KL: No, sometimes they ask for that, but I’m trying to get away from that because that can be a little bit odd. Bizarre when I have to sign in certain places. (laughter) We have an opportunity when each passenger comes on board to really make a difference and bring them back. And I know we need to work on that. And that’s what I try to do. It’s like, How do you want to be remembered when they get off the plane? It could be that they’re flying once a year and I want them to be left with a memorable experience with Delta. And remember me giving great service!

AG: So, who is Katherine Lee?

KL: I’m just a down-to-earth girl who loves my job as a FA; who loves working with people. Yeah, that’s it. That’s a harder question than I thought! Nobody ever asks me about me! (laughs)

AG: And that’s why we’re doing this interview! So, you say you’re a down-to-earth kinda girl and that you enjoy your job. You love your job as a FA. Was being a FA a life-long dream for you?

KL: You know what’s funny? My father was in the military, so growing up my first flight was when I was 11 months old my mom says. So, I’ve always been flying. I remember as a kid on the MAC (Military Airlift Command) flights, I would pick trash up and help out. My mom would ask, ‘what are you doing?’ I would say I’m just helping. I’ve always been a helper. I’m a typical Cancer, I like to take care of others. I’m just a giver. So, I think I started doing that as a child. I didn’t initially set out to be a FA. I wanted to be a vet, then a nurse, and a journalist. I thought, let me try this for a year and see what happens. And that was 15, almost 16 years ago.

KL: Literally! (laughs) It feels like I started yesterday. It’s so crazy! This job is so amazing. It’s always a good time.

AG: What is it about being a FA that you like the most?

KL: Gosh! That’s so hard because there are so many great things! Obviously the traveling. All kinds of crazy places. I just recently did Tulsa and I had never laid over in Tulsa in all my years of flying.

AG: I was in Tulsa all the time when I was flying!

AG: You didn’t because you’re a speaker.

KL: I was usually flying International…Latin America. It was such a great time in the little town of Tulsa. We found some great places to eat and hang out. I think exploring new places is always at the top of the list. And meeting extraordinary people, I think, rounds out the top 2. Both of those are great.

AG: What would you say to be the most challenging part of being a FA?

KL: I’d rather eat a bug than have to deal with that baggage. (laughter) I will say this, Delta has been very proactive with checking bags at the gate. They’re being proactive to help us (the FAs) out. But it is amazing to me that people will still come on and travel with their bricks and then expect me to lift the whole thing by myself. I’m all about helping, but it’s sometimes the passengers that are the most frail who come on with the heaviest bags. And that’s just unsafe.  And number 2, the passengers who don’t want to turn off their portable electronic devices. I have an iPhone and it’s amazing how they think they turn those things off. I’m like, ‘I don’t know if you have the iPhone 10, but I turn my off where you have to swipe (gestures swiping motion), not the click.’ It’s pretty funny (laughs). Then they turn them off. So that’s #1 and #2: bags and electronic devices.

AG: So, you said you’d rather eat a bug. Is that a chocolate covered bug?

KL: Absolutely! Dark chocolate! Because it has antioxidants. Remember this, not milk or white chocolate, only dark. (laughter)

AG: That’s crazy talk! We can see that you look very healthy. Is health important to you?

KL: Absolutely! That’s why I eat a lot of Pei Wei (Asian Diner). (laughter). Brown rice. Lots of roasted veggies. Located on F Concourse. Pei Wei if you’d like for me to represent you or mention you in a tweet…(laughs)

AG: All this time we thought it was pronounced “Pee Wee”! (laughter)

KL: And his little circus, located on F Concourse! (laughter)

AG: You mentioned your father was in the military. Would you consider yourself a military brat?

AG: So, you lived in many different places?

KL: I did. All over the world. The traveling is in my blood from when I was a child. So, I adapt well to that.

AG: The airlineguys know you speak Spanish. For those who don’t know, how did a fair-skinned, light-color eyed, redhead woman come to speak Spanish so fluently?

KL: Well, my father is wondering the same thing! (laughter) And my dad thinks it was the milkman. My mother says no. You know, it’s funny. My father is from Puerto Rico. My mother is German, she still has a very thick accent. Some people thinks she’s actually speaking German when indeed she’s speaking English because her accent is so thick (laughter). But of course I don’t hear it. A lot of people say my dad sounds like Benicio del Toro. It’s odd because you don’t hear it in your own parents. But anyway, so yeah he’s from Puerto Rico so he spoke Spanish to me as a child. We also lived in Panama and Mexico growing up so I speak with more of a Mexican accent. But I haven’t been using it lately so I’m a little rusty.

AG: Well, I’m taking Rosetta Stone so we should start speaking in Spanish.

KL: Well, fantastic! Then we can watch a tele-novella together. It’s the best way to learn. (laughter)

AG: Can you say a little something in Spanish the way they would on a tele-novella?