Long haul or short haul? The career path of a Flight Attendant.

We were having lunch the other day at the airport when I noticed a mature (older) flight attendant having lunch. She wasn’t partaking of the usual airport food but had a lunch tote full of goodies. My first thought was, “How cool, she’s eating healthfully.” My second thought was that maybe her wages have been impacted so greatly that she can’t “afford” to eat out while flying. Either way, I concluded it’s probably a combination of the two.

As I walked away I was struck by the thought: when did it become necessary for a flight attendant to bring their food with them on their trips. Flight attendants during the “good ole’ days” didn’t have to consider doing this. Come to think of it they had more options for onboard dining from company-provided crew meals to untouched passenger meals. Also, flight attendants made more money back then so they could afford to buy lunches and dinners when they flew. Wow, how things have changed.

My mind got to wondering. Given the dramatic changes to airline industry,  “Is being a flight attendant a long term proposition anymore? Or, has the industry changed so much that the position is moving more towards what it used to be – a job to be done for only a few years?” 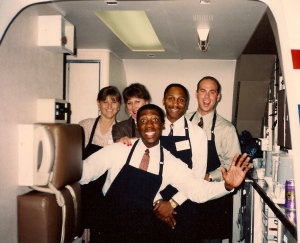 That's me during initial training.

Ever since the airline industry was deregulated in 1978, the industry has endured breakneck changes. Many airlines, some of them very well-known, have come and gone. With deregulation came lower pricing. Airlines then started to compete on price and less on service. The “good ole days” were quickly approaching the end of the runway.

More pronounced since the events of September 11, 2001, air travel today has become extremely stressful. Enter the TSA with their hodgepodge of rules and regulations that are inconsistent and seemingly meaningless, body scans, and pat downs. Add to this, load factors in the mid-80% range, high expectations from the traveling public, and you have a recipe for high drama in the skies.

To mitigate the stresses (high load factors, security concerns, mergers, bankruptcies, and pay cuts) of the job on the well-being of the flight attendant group , how likely would it be for an airline to offer a specified period of time to be a flight attendant? Say, 5 year intervals. There could be the option to renew, and a lump sum payout at the end of the time period if you, or the company, chooses not to renew. Think of the benefits for the flight attendant?

When you think about it being a flight attendant is still a good job. The travel. The people you meet. The life skills you learn. The confidence you gain. All through travel. All while getting paid. With term limits factored in, you’ll be motivated to make the most of this time to travel, explore, learn, prepare for the next step. Sounds good.

Consider this also: as a FA you come into contact with hundreds of people in the course of a days work. That’s a lot of “hellos” and “buh-byes”. Extrapolate that over a 5 year, 10 year, 40 year range and only a small percentage of people would be able to maintain the same level of enthusiasm for serving the public. The NYTimes article featuring United Airlines flight attendant Ron Akana is a great example. He’s been flying 63 years and still loves his job. I’ve met my share of Ron’s in my years as a flight attendant. However he, and a few others are unique in their enthusiasm after all these years. They are the Gold Standard.

Many flight attendants probably don’t like the idea of having term limits on being a flight attendant. Why would anyone want to give up the opportunity to earn more and work less? Consider this: some of the longest, most challenging flights, are being worked by those with the most time under their belts. They’ve said the most hellos and buh-byes. They’ve crossed the most time zones. This type of flying takes a toll on most flight attendants. Heck, working those types of flights when I was in my 30’s was a challenge!

To institute term limits on the flight attendant position, with the option to renew, would have a profound effect on the profession. I’m sure some would see it as a step backwards. Others would see it as a way to ensure that the job is still suitable as you accrue seniority.

We would love to hear your input. The good. The bad.