FAA Expected to Relax Restrictions on Use of PEDs

FAA Expected to Relax Restrictions on Use of PEDs

Despite the repeated insistence of the flight crew, do you have trouble shutting down your iPad, Kindle, or Nintendo 3DS before pushing back or landing? Well, good news may be coming. According to a draft report from the Federal Aviation Administration (FAA), the outdated restriction against the use personal electronic devices (PEDs) below 10,000 feet may be relaxed later this year. Current restrictions on cellphone calls and internet use are expected to remain unchanged.

The Aviation Rulemaking Committee (ARC), a 28-member advisory panel commissioned by the FAA, began an investigation last August whether the use of some electronic devices onboard flights could be expanded. The use of cellphones inflight, however, was not part of the investigation.

The panel is currently scheduled to submit its final report to the FAA at the end of September. The details are still under debate, but the panel is expected to recommend that the FAA relax its restrictions during taxiing, takeoff, and landing.

FAA spokeswoman Laura Brown: “The FAA recognizes consumers are intensely interested in the use of personal electronics aboard aircraft. That is why we tasked a government-industry group to examine the safety issues and the feasibility of changing the current restrictions.”

The ban against the use of all devices until planes reach an altitude of 10,000 feet was first introduced in 1966 — a time when passenger jets were less tolerant to electromagnetic interference from computers and other electronic devices. In the years since, aircraft have improved to better withstand such interference.

Electronic devices themselves have also become less threatening to onboard systems since the original ban. According to the report, today’s devices use less power, transmit weaker signals, and ‘stay within a tighter range of frequencies.’

In a recent statement Sen. Claire McCaskill (D-Mo.) praised the potential changes, “It’s good to see the FAA may be on the verge of acknowledging what the traveling public has suspected for years — that current rules are arbitrary and lack real justification.”

In fact, nearly 30 percent of passengers may not even turn their electronic devices off during a flight, according to a study released last monthby the Airline Passenger Experience Association and the Consumer Electronics Association.

The Association of Flight Attendants-CWA (AFA) is among the members of the ARC panel. In a press release issued on June 21, the AFA expressed its committment that the safety of the flight “will not be adversely affected.”

Because flight attendants must constantly remind passengers about the rules about PED usage and because some passengers outright refuse to turn off their devices, AFA spokeswoman Corey Caldwell stated, “It’s no secret that the use of personalized electronic devices in the aircraft often causes a problem.”

While a relaxation of the restrictions on PEDs below 10,000 feet will certainly not solve all the problems associated with modern air travel, it will at least be one less source of frustration.

Following a Dream…liner (on the hunt for the 787 Dreamliner)

The 787 is taunting me. Teasing me. In fact she’s being downright elusive. Ever since the 787 Dreamliner was introduced by Boeing it has been our goal, as the airlineguys, to fly on this revolutionary, highly technical airplane. After years of delays and issues with the lithium-ion batteries, which grounded the entire fleet worldwide, the 787 made a triumphant return to the skies on April 29, 2013 with Ethiopian Airlines.

Currently, United Airlines is the only US-based carrier flying the 787. When United introduced the Dreamliner they were flown on domestic routes to test its reliability and serviceability. After the much talked about grounding, the 787 was re-introduced to the domestic sector, again to test reliability, serviceability, and to monitor the lithium-ion battery fix. As planned from the outset, United’s 787s were designed as an international long-haul product.

So, it was with excitement when United announced that the Dreamliner would fly domestically until the summer schedule went in to full effect, at which time the 787s would fly their intended routes, international. It was our chance to fly this magnificent plane. Unfortunately airlineguy Darin couldn’t join me on this adventure (we gotta get him on a 787 soon!).

The first attempt to fly the 787 was a bust! I didn’t make the flight out of Atlanta to make the connecting 787 flight in Houston. Talk about being majorly bummed. Not wanting to take any chances on the second attempt, I flew to Houston the night before and got a hotel room.

So, now here was my dilemma: standby for the early (7a) IAH – ORD flight, or take the mid-morning (11a) IAH – ORD flight. Against everything I know when it comes to standby travel, I chose the mid-morning flight. (@FriendlyStew and @NonRevAdventure I’ll take your advice next time). All seemed fine until I woke up the next morning to find out that the 11a departure had an equipment swap from a 787 to a 757. Oh, the horror! Again, majorly bummed.

I’m an optimist.  I did some research, made some calls, and sent a few frantic text messages. Much to my delight there was a late afternoon (4p) 787 flight from IAH – ORD. With camera in hand, a positive frame of mind, I headed to IAH for a day of people watching and planespotting. Besides getting on the 787, could you ask for anything more entertaining?

In the hours (about 5) spent at IAH here’s what happened:
• took loads of airplane pics
• was fascinated people watching (amazed how each airport has its own “personality”)
• bumped into 3 aviation professionals who attended a customer service training class I helped facilitate (besides being #avgeeks, the airlineguys are aviation consultants specializing in customer service)
• recognized and reconnected with a high school friend who is an RN and who now is a United pilot (I’m still reeling from this chance encounter and so happy to be reconnected with Mark!)

As you can see, my time spent at the airport waiting for the 787 was well worth it. Yes, she was being elusive, but I had come so far and was not about to give up now.

When I received my seat I was beyond excited: window, exit row.

Here are my thoughts on taking my first United 787 flight:

• First impression — gorgeous
• Mood lighting upon boarding —  soothing (there are 6 settings: boarding, meals, relaxing, cruise, sleep, preloading)
• Layout of FC – spacious (this is where I want to be on my next 787 flight!)
• E+ — roomy, relaxing hues of blue and grays throughout the cabin
• Windows — most were darkened already, customers began experimenting with the window “shades”, impressed with how the tint changes from transparent to opaque with the touch of a button, the size of windows (30% larger according to infographic card in seat pocket) was very noticeable — when seated you had an unobstructed view of the horizon (no craning of neck to look up or down)
• Sound — very taken with how quiet this plane was at takeoff and cruise altitude (60% less noise than planes of comparable size), it was so quiet I could clearly hear the crying kid a few rows back, noise-reducing chevrons on engine nacelles contributes to reducing noise levels of the engines
• Wing — loved the wingflex, sliced right through the air even in mild turbulence
• Crew — friendly and efficient, had nice conversation with Edwin who too is from South Florida, and Sandy was kind to take my picture
• Food — ordered the Tapas snack box, Bloody Mary, water, crew were proficient with handheld devices
• IFE — full selection of films, TV, music, moving map, UA services/amenities, a full system reset was completed on at least 2 occasions
• Landed on time, to gate after short delay due to ramp congestion

Overall, an awesome passenger experience and a wonderful introduction to the Boeing 787! Would love to take a long-haul flight to experience the 787s feature of increased oxygen and humidity of the cabin air (lessens the effects of jet lag we hear). Hint, hint 😉

Thanks United for an awesome experience! 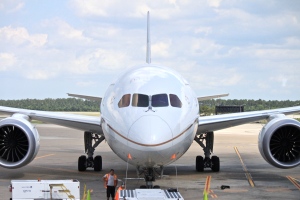