About 3 weeks ago we read an article about a little known company named Air Hollywood. The article was about their “K-9 Flight School” whereby they train dogs to be comfortable in and around airports and airplanes. As lovers of dogs we were very intrigued. As lovers of all things aviation (some would say we’re geeks), we were enthralled by Air Hollywood. We promptly connected with Air Hollywood to inquire about taking a tour of this very unique studio. To our surprise, and delight, they answered our inquiry with enthusiasm. We quickly set up a visit.

Nestled in an industrial park near Northridge CA, a suburb of Los Angeles, is an unassuming studio. There are no ornate gates to welcome you, no electric golf carts whizzing executives from set to set, no reserved parking spaces with famous movie stars names emblazoned on them. What we found was a small team of enthusiastic, funny, accommodating folks charting a path as a niche studio.

Leading the team is founder and CEO Talaat Captan; a movie producer who experienced the challenges first-hand of filming in and around airports. And these challenges became more evident after the events of September 11th. It was through these challenging experiences that Talaat set out to create an aviation world that would be very realistic and one that would be much easier to work within. And hence, Air Hollywood took off.

The rest of the team included Rachel, Morgan, Matt, and Toshi. All affable and accommodating. And let’s not forget Lucky, Talaat’s adorable little dog that was visiting the office for the day.

It was Rachel, the set booking agent who’s responsible for PR and marketing at Air Hollywood, who gave us the behind-the-scenes tour. She was knowledgeable and excited about leading us on the tour.

The tour began with a visit to a narrowbody (single aisle) mock-up. Once inside we were told that the interior of each of the mock-ups could be custom designed for the needs of the client or specifically configured for a specific airline. We also learned that the ceiling could be removed and the aisle widened, if needed, to accommodate lighting and cameras when filming. The mock-up included galleys, lavatories, and a cockpit. The cockpit was “open” such that filming could take place from all angles. This gave new meaning to the term “glass cockpit”. A unique feature of this mock-up was the ability to create “turbulence”. Huh? Through airbags housed underneath the mock-up platform, compressed gas could be sent to the airbags allowing for the entire mock-up to shake, rattle, and roll. While we didn’t get the opportunity to see it firsthand, we were informed that turbulence could be set on a scale of 1 to 10. And Rachel said 3 was pretty intense.

We then moved on to the “terminal”. Inside the terminal we found a check-in counter, waiting area with seats, and a security check point complete with magnetometers. Rachel explained that through strategic positioning of seats, signage, and flooring, many different looks and effects can be achieved.

The next mock-up we visited was also a narrowbody, however, it included a first class section. This mock-up, like the previous one, had moveable ceiling panels, real overhead bins, and a cockpit. And what a cockpit it was! This particular cockpit was THE cockpit used for the filming of the movie Airplane! Talk about excited! Surely we had to take a picture in this piece of aviation and film history. And don’t call me Shirley. Roger that. Roger Roger. 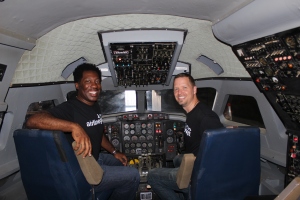 THE airlineguys inside THE Airplane! cockpit

Moving on from the narrowbody mock-up, we now visited a widebody (dual aisle) mock-up. The layout was that of a Boeing 767. The cabin was…spacious. If only…but we digress. On this set, the crash scene from the critically acclaimed TV series “Lost” was filmed; an intense scene made all the more real because of the details of the set provided by Air Hollywood. The widebody mock-up also includes a jetway. A few scenes of the comedy “Bridesmaids” was filmed on this jetway and inside this widebody mock-up.

Next came the props department. This was an immense area that housed a Lear jet mock-up and items needed to dress the set. There were various luggage styles categorized by period. So, if a scene called for luggage from the 70s, they have it. There was signage from various airlines. Signage also came in different colors and languages. There were telephones and telephone booths. Beverage and food carts of varying sizes included glassware and snacks that would never go stale (they were plastic). There were newspaper stands with newspapers. Need a smartcarte to haul your luggage? They had those too! Looking for a place to check in for your flight? Kiosks and ticket/gate counters were numerous. It was almost too much, yet we didn’t want to leave!

On the tour we also saw a room for hair and makeup for the actors, and a holding room for the extras who serve as passengers.

After our whirlwind tour of the facilities we had the opportunity to sit with Talaat, the CEO and founder of Air Hollywood. This man is passionate about aviation! As he spoke it was like listening to ourselves speak. He told of us of his love of all things aviation. He shared his experiences in the film industry. His love of dogs and how important the “K-9 Flight School” is to him really struck a chord in us…what a great service! Talaat also shared his desire to grow Air Hollywood’s list of services including the “Fear Of Flying Program”.

He then asked about us. We told him about our experiences in aviation (as former cabin crew, facilitators, PR ambassadors, and our penchant for discerning excellent customer service). We also shared our goal of the airlineguys: To create a community of like-minded people who love aviation; who love what air travel means (experiences that can broaden the mind and change you in a positive way); a community that chooses to focus on the positive aspects of air travel instead of the negative. And through our experiences and connections with other like-minded people, we can bring light to this often maligned marvel of physics and power.