At the close of last year Darin (the other airlineguy) blogged an entry detailing his early childhood memories of aviation. He was fortunate to have grown up in an airline family. As for me, I didn’t. However, I think we both had a fascination with flight that started early.

As a kid growing up in rural Jupiter, Florida I would daydream about leaving on a jet plane. Not that Jupiter was a bad place to grow up. However, I knew there was a big world out there that I wanted to see. I found myself looking up a lot as a kid. Whenever I’d see a plane flying overhead I would first identify the aircraft type and then the airline. After determining this very important information, I would make up a story about where the plane was going to or coming from. Back in those days the aircraft were mostly 727s and L-1011s. The airlines I saw most: Delta and Eastern. For us Florida folk did any other airlines exist?

I was a late bloomer. My first airplane ride was at 16 years old. I had spent the summer in Atlanta attending the Resource Center for Science and Engineering at Atlanta University and my parents had driven me up from Jupiter. At the end of the summer program I called my folks and told them that I didn’t want them to come and get me. Once the shock wore off I asked them if I could fly home instead. They agreed and purchased for me a one-way ticket on Delta from Atlanta to Palm Beach International. The ‘new’ Atlanta airport had just opened. At the time it seemed so futuristic. I was beyond excited. Ecstatic would be more like it. Once again I found myself looking up.

At my age memories do come and go on occasion, but not about this. It was a Saturday morning. My friend and his family, whom I had just met that summer, drove me to the airport. In fact, they all came to the gate with me. It was 1981 so you could do this. The interior of that Delta 727 was psychedelic; complete with faux wood paneling in first class. The flight wasn’t very full. I had a window seat in coach. The sun was shining. The flight attendants were friendly. Even though the flight was about an hour and a half, it seemed longer. I’m sure that had to do with savoring every minute of the experience. Things were really looking up.

We landed safely and on-time in West Palm Beach. It was great reuniting with my family after being away for almost 3 months.

That plane ride was a defining moment in my life. And I’ve been looking up every since.

In our busy lives we sometimes forget to look up. I encourage you to do so everyday. 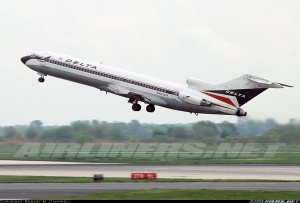